A Multimodal Analysis of Dialect and Humor on Chinese Social Media

Afforded by China’s growing social media market and mobile phone app development, thousands of entrepreneurial individuals have become famous online, known colloquially as ‘Wanghong’. On such social media apps as Weibo or Douyin (TikTok), they use the affordances of the media (e.g. posting short videos, text messages, pictures, livestreaming) to create a distinguishing and yet recognizable personae, in order to attract followers. One such way to gain a following is to create an image as a ‘grassroots’ person. For some, this is performed through portrayals of a ‘countryside’ or working-class life. Others may use a local dialect (fangyan) to demonstrate a connection to a ‘non-standard’ personae. Performing in dialect is often keyed humorously, playing against a type or category of person. For this study, I conduct a semiotic multimodal analysis of select short videos posted to Douyin by wanghong (e.g. Bbeirabbit, Hunijing, Tianfang) that use humor and nonstandard Chinese dialects, analyzing the modes and symbols that they use, such as voice, text, dress, gestures, filters, sound, and camera angles. In addition, select comments posted by followers are analyzed to show a range of responses and interpretations. Finally, I demonstrate a methodology for studying Chinese humor and nonstandard dialects on social media.

Todd Sandel is an associate professor in the Department of Communication at the University of Macau. His research interests are in the areas of language and social interaction, intercultural communication, and Chinese Social Media. He is the author of Brides on Sale, and associate editor of the International Encyclopedia of Language and Social Interaction published by Wiley. From 2017 to 2020 he was Editor-in-Chief of the Journal of International and Intercultural Communication. 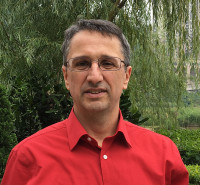