Populism, Authenticity and the Discourse of Donald Trump 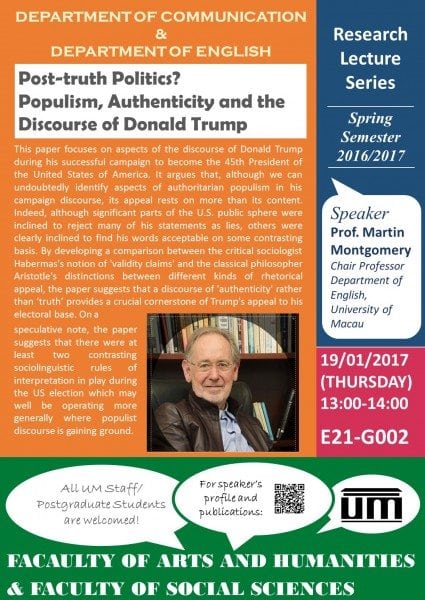 This paper focuses on aspects of the discourse of Donald Trump during his successful campaign to become the 45th President of the United States of America. It argues that, although we can undoubtedly identify aspects of authoritarian populism in his campaign discourse, its appeal rests on more than its content. Indeed, although significant parts of the U.S. public sphere were inclined to reject many of his statements as lies, others were clearly inclined to find his words acceptable on some contrasting basis. By developing a comparison between the critical sociologist Habermas’s notion of ‘validity claims’ and the classical philosopher Aristotle’s distinctions between different kinds of rhetorical appeal, the paper suggests that a discourse of ‘authenticity’ rather than ‘truth’ provides a crucial cornerstone of Trump’s appeal to his electoral base. On a speculative note, the paper suggests that there were at least two contrasting sociolinguistic rules of interpretation in play during the US election which may well be operating more generally where populist discourse is gaining ground.