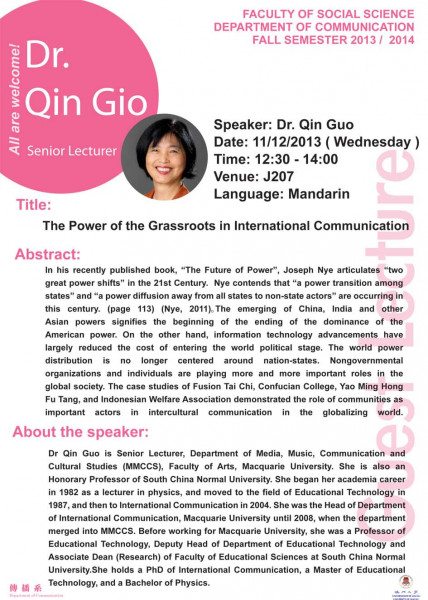 In his recently published book, “The Future of Power”, Joseph Nye articulates “two great power shifts” in the 21st Century. Nye contends that “a power transition among states” and “a power diffusion away from all states to non-state actors” are occurring in this century. (page 113) (Nye, 2011). The emerging of China, India and other Asian powers signifies the beginning of the ending of the dominance of the American power. On the other hand, information technology advancements have largely reduced the cost of entering the world political stage. The world power distribution is no longer centered around nation-states. Nongovernmental organizations and individuals are playing more and more important roles in the global society. The case studies of Fusion Tai Chi, Confucian College, Yao Ming Hong Fu Tang, and Indonesian Welfare Association demonstrated the role of communities as important actors in intercultural communication in the globalization world.