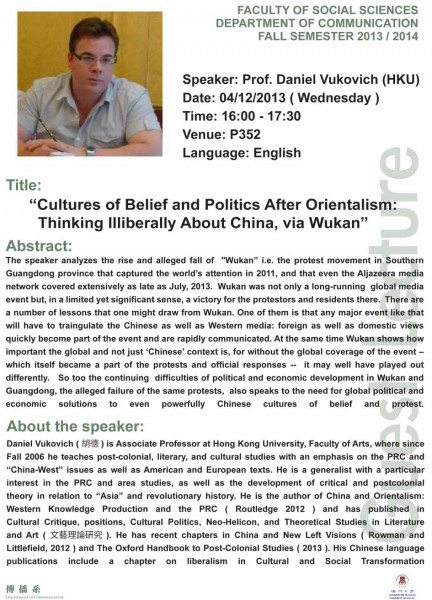 The speaker analyzes the rise and alleged fall of “Wukan” i.e. the protest movement in Southern Guangdong province that captured the world’s attention in 2011, and that even the Aljazeera media network covered extensively as late as July, 2013. Wukan was not only a long-running global media event but, in a limited yet significant sense, a victory for the protestors and residents there. There are a number of lessons that one might draw from Wukan. One of them is that any major event like that will have to triangulate the Chinese as well as Western media: foreign as well as domestic views quickly become part of the event and are rapidly communicated. At the same time Wukan shows how important the global and not just ‘Chinese’ context is, for without the global coverage of the event – which itself became a part of the protests and official responses — it may well have played out differently. So too the continuing difficulties of political and economic development in Wukan and Guangdong, the alleged failure of the same protests, also speaks to the need for global political and economic solutions to even powerfully Chinese cultures of belief and protest.